NEPTUNE – ASBURY PARK : THE 91st TIME, MORE THAN A RIVALRY 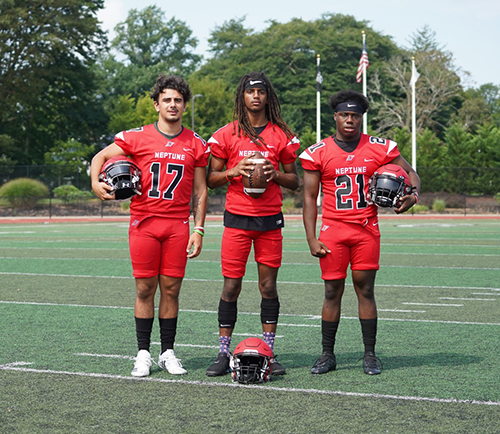 NEPTUNE – ASBURY PARK : THE 91st TIME, MORE THAN A RIVALRY

By Eugene M. Stewart
Few rivalries have longer duration than the Neptune – Asbury Park Thanksgiving Day game.  Most teams with history like this have long-gone away from renewing their yearly mashup.  The 91st offering of this shore classic has the Asbury Park Blue Bishops hosting the Neptune Scarlet Fliers on Thanksgiving Day at 10:00 am, for the next chapter of this traditionally explosive contest.
Neptune leads the series, 48-37-4.  More recently, this contest has become more about should the game continue and less about actually playing of the game.  Diminishing enrollment, state playoff games, sectional and group changes, along with safety concerns have all affected the game over the past 15 years.  Through it all, the excitement generated every turkey day is infectious for both Flier and Bishop faithful.
Ask anyone from either town about the Neptune – Asbury football rivalry, you will hear some of the best football stories ever told.  Many will tell the tale of the great catch, block, tackle or pass they, their friend, brother or classmate made which tilted the balance in one direction or the other.  This year’s contest has potential to be a barn-burner with both teams producing winning seasons –  Neptune at 5-4; Asbury Park at 5-3.
Recapping the season, Asbury Park opened with a 35-6 loss to Shore Regional before running off three straight wins versus Pinelands (22-6), Pt. Pleasant Beach (22-7) and Keansburg (21-6).  Keyport slipped by Asbury Park by a touchdown (22-16).
“Through this loss, we really grew and progressed, developing a better understanding of what it takes to be victorious,” said Asbury Park head coach Tim Fosque.  “My team grew together as a group and as individuals.”
The Blue Bishops then captured two more wins over Manchester (26-8) and Barnegat (15-9) to close the regular season.  A first-round South Jersey, Group I NJSIAA playoff game matched Asbury Park against Woodbury, which Woodbury won, 42-20.
“My guys really hung in there. We’re a very young team and we lost some very key pieces from last year,” said Fosque.  “I’m happy with our development as late in the season, my youngsters began to believe in our system.  We grew and accomplished what we did, all with a true freshman at quarterback.”
As for Neptune, the season began with two big losses against Long Branch (25-13) and Ocean (19-6) –  two of the better teams at the Shore early in the season.  Next a two-game winning streak against Lakewood (50-20) and Jackson Liberty (46-0). A one-point loss to TRE (14-13) was followed by closing out the season with three convincing wins against Toms River South (36-28), Colts Neck (21-17) and Matawan (34-14).  The Matawan win qualified Neptune for its first playoff berth in three years.
“We learned about ourselves every week, win or lose,“ said Neptune head coach Tarig Holman.  The 8th-seeded Fliers travelled to Burlington County for a matchup against top-ranked Shawnee in 25-degree weather, where Shawnee won the South Jersey, Group 4 contest, 31-21.
“We’ve had some really good offensive games, some really good defensive games and some really good games on special teams – we’ve yet to put all three together in one game,” said Holman. “Hopefully we can pull it together on Thanksgiving against a tough Asbury Park team.
This game is one of those where you can throw out the records.  It doesn’t matter because everyone comes out with emotion.  It took me two years coaching here to get to see that.”
In 2017 the game was canceled due to a threat.  “In 2018 it was one of the coldest Thanksgivings in a while and to look out and see how many fans from both sides were at the game, cheering on their team was telling as to the importance of this game.”
A show of how it’s not just a football game, this past Sunday, at Macedonia Baptist Church in Neptune, Pastor Tommy Miles, a Neptune alum, hosted the second  annual Friendship Luncheon.  The event was for all varsity football players, cheerleaders, coaches, Board of Education members and district administrators to participate in great spirits in a competitive nature, leading up to the game
Said Fosque, “The core is about bringing the youth together and the programs together in a positive atmosphere to set the tone for what this game is really about, a friendly competitive outing.  Our superintendent, Sancha Grey, is the point person for Asbury Park in planning this year’s event, which shows this event is about more than football, but it’s the unity of the two towns and districts.”
Fosque, a 1990 graduate of Asbury Park who played OG and DE, said that every game he participated in was a game that stands out for him.  “The game when I found a real understanding of what a rivalry was 1985, as a middle schooler sneaking through the fence at Asbury Park, watching that game.  I was overwhelmed by the competitive spirit on both sides of the ball.  That’s when I found out what a rivalry was.  When I hear rivalry, I think Neptune.”
When asked for a prediction on Thursday’s game, Fosque laughed and replied, “I predict an exciting, competitive game with both teams’ fans on the edge of their seats through the whole game.”
Holman, a 1995 graduate of Randolph High school who played defensive/running back and receiver in his playing days stated, “Rivalry is all about your willingness to compete and have the upper hand on the guys that live next door or down the street from you.  When you’re back to school, looking at your classmates, teachers and teammates with pride, saying we did this for us (the community) –  it’s huge.  Being a part of something great and looking at the community involvement – administrators, cheerleaders, band, fans – all coming together before we go back to our families to enjoy their company, is real cool.”
If you can make it, be sure you’re there to witness this year’s game.  You never know who is going to shine or who’s going to win, but you know both communities will be out in force supporting all the young people involved.

Jersey Sporting News is the leader in high school sports news for South Jersey and Florida. We provide you with the latest breaking news, player profiles, awards and videos.

Press Release: The All American Auto Group is trying to help as much as they can during these hard times.

JSN Stronger Than Ever

Be An Ally to LGBTQ Individuals By Nicole Sorokolit Croddick