The Devils are a wagon on the road. Their 18 road wins have been the most in the National Hockey League (NHL) this season and they even went a full month without a road loss (Dec. 20 vs Carolina). They are coming home after another record-setting west coast road trip where they took nine of a possible ten points and went 4-0-1 in the five games. With a week left before the break for the All-Star Game, it's not too late for the Devils to change their fortunes at home.

Keeping New Jersey's Metropolitan Division rivals in mind, the Pittsburgh Penguins, fresh off a victory over Ottawa, will face the Devils on Sunday afternoon at the Prudential Center. The Penguins occupy the second spot in the Eastern Conference wild card race, nine points behind the second-place Devils. Games like these are essential for the Devils to solidify playoff positioning but the biggest challenge New Jersey may face in the second half, is to find a way to play better at home.

Despite sold-out crowds at the Prudential Center, the Devils' play there has been inconsistent. When asked, players and coaches have been at a loss for a viable explanation. Head Coach Lindy Ruff told reporters that his team brings a more focused, detailed and simpler game to games on the road. He speculated that players are excited to put on a show for the home crowds and tend to try to make the more difficult plays rather than the simple plays. Veteran defenseman Brendan Smith said that at times it seems the team has not come out of the gates quickly at home, while on the road they know they have to be ready from puck drop.

Four of the next six games will be at home including two against Pacific Division leaders, Vegas and Seattle. Finding a way to secure six of eight points in those games is essential in setting the Devils up for the second half of the season.

REUNITED, AND IT FEELS SO GOOD

With the return of forward Nathan Bastian, who was out with an upper body injury Nov. 26 against Washington, the Devils have a full complement of forwards for the first time since October 25.  Ruff reunited the BMW line of Bastian, McLeod, and Wood against the Kraken to mixed success.  Earlier in the season the BMW line, unique for a fourth line, contributed offensively and forechecked well. The team had to hope that Bastian's return may spur on a return to form for Miles Wood who has scored once in his last 30 games. Unfortunately for the Devils, the BMW line got stuck in neutral and was their worst line against the Kraken because they were trapped in their own zone for extended shifts throughout the game ending with a Corsi For % of 18. It got to a point where Ruff did not send Bastian out at all in the third period and shrunk his bench to go with three lines in an attempt to get back in the game.

The good news for the Devils is that Ruff now has options. Should players underperform, he has depth at forward in Alex Holtz and Fabian Zetterlund who have been healthy scratches for the last four games. Each has shown glimpses of the ability to become NHL regulars and will likely get a chance to reenter the lineup with the team playing four games over the next six days before the break.

John Marino is the last player left on injured reserve and he has resumed practicing albeit in a non-contact capacity. Once the Devils have Marino back in the lineup, it should give General Manager Tom Fitzgerald some time to evaluate his team's needs before the trade deadline on March 3.

ALL STAR SNUBS AND TRADE TARGETS

The NHL this week announced the additional three players for each division that would be making the trip to Sunrise, Florida for the 2023 All Star Game. The selections, by fan vote, for the Metropolitan Division were Artemi Panarin, Adam Fox, and Ilya Sorokin.  While all three are certainly deserving, the selections point out all that is wrong with how the NHL puts on the game. The Devils and Hurricanes who sit in the top two places in the division have a total of two representatives while the Rangers and Islanders, who sit in third and sixth respectively, have a total of five representative. There are divisions (Atlantic) who have zero defensemen as representatives.

At the very least the NHL needs to expand to 15 players per division, 12 skaters and three goalies which would ensure that the top teams are better represented. Of the three teams who will have three players each in Florida, none are leading their division and the Bruins, Jets, Devils, 'Canes, Stars, and Golden Knights each only have one skater representative. Heading into the additional selections with two slots remaining for skaters there were seven skaters all at or above a point-per-game: Panarin, Jesper Bratt, Sebastian Aho, Mika Zibanejad, Evgeni Malkin, Nico Hischier, and Adam Fox. All deserve to be All Stars and the best way to grow the game is to have players like this play in the NHL's biggest talent showcase. This list even leaves out stars like Martin Necas, Matthew Barzal, and Jake Guentzel, who are also having great seasons.

As the calendar hurtles towards the trade deadline, the pending implosion in Vancouver is accelerating the potential for trades.  The Devils have been linked to players all over the league seemingly to fit a hole as a scoring winger/power forward to play on a line with Hughes or Hischier. The biggest prizes on the market that make sense for the Devils are Bo Horvat and Timo Meier.

Irf: Devils have been interested in Horvat for awhile.

Horvat, the Vancouver captain, is a pending free agent and is at an impasse with the Canucks front office who will look to trade him rather than let him walk. The Canucks have determined that they will only pay Horvat based on his prior performance and not based on the career year he is putting up this year.  Horvat's toughness, leadership, faceoff ability, and finishing are great fits for the Devils, but the questions remain, at what cost and how do they fit it under the cap? Word out of Vancouver is that Horvat is being sought-after by many teams and that Vancouver would not permit teams to try to negotiate a long-term offer with Horvat prior to making a trade which may impact the package they can get.

Timo Meier remains the player most prized by Devils fans. The Swiss winger is having another dominant year and is the power forward that the Devils have been thirsting to put alongside Hughes. Meier is third in expected goals and has 46 points (26 G 20 A) in 46 games. Meier's physicality with 104 hits so far (20 more than Devils leader Brendan Smith) would be a welcome addition to the Devils top six.  Earlier this week there were reports that the Sharks could expect to get less for Meier than the Blackhawks got for Alex DeBrincat at last year's draft.  The rationale being that the Senators got DeBrincat with two years control while Meier is under team control for only a year and has a ten million dollar qualifying offer. The Sharks may have changed the calculus, however by indicating that they would allow teams to negotiate a long-term extension with Meier before finalizing a trade.

Later in 32 Thoughts, Friedman said he was told if a player goes early, it could be Timo Meier.

Plenty of interest, but teams concerned about the QO. But SJS are willing to let teams talk to him about an extension. #NJDevils mentioned as an interested party. NYR, CAR too

With Carolina and the Rangers in the mix for Meier it would behoove the Devils to do all that they can to land the player even if the cost in futures and prospects is high. As recently as Monday, Meier showed the Devils what they could expect from his play, should he become a divisional opponent. With the news this week that Max Pacioretty's season is over, expect the Canes to be aggressive in the trade market looking for scoring. Other names the Devils are rumored to be in the mix for are Gustav Nyquist, James van Riemsdyk, Vladimir Tarasenko, and Jonathan Toews.  All of these players could improve the Devils and help with a playoff run, but Horvat and Meier are the prizes, and the Devils should do what they can to add either. 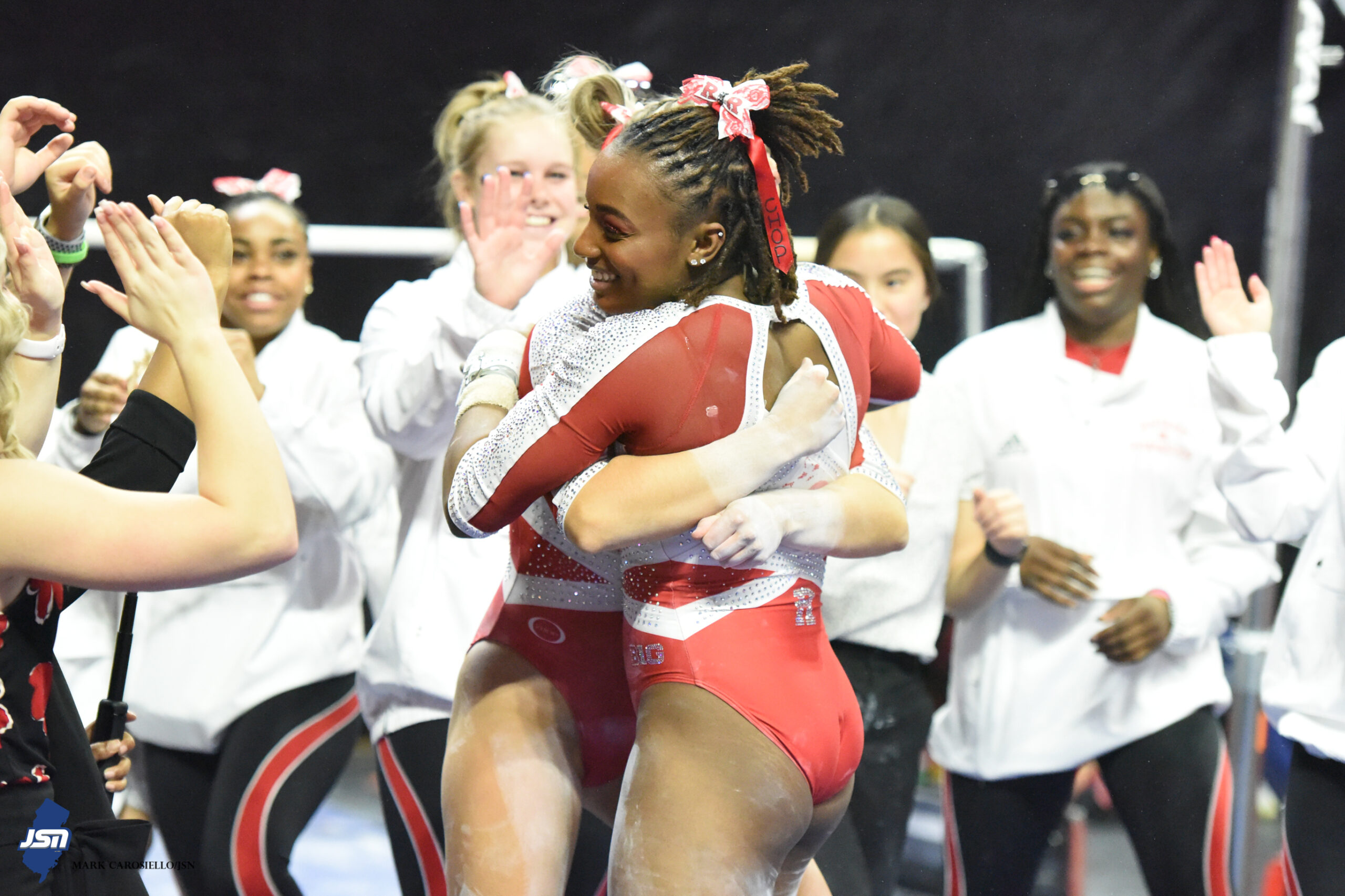 Records fall for Rutgers gymnastics against No. ...