No. 10 Colts Neck (15-5, 11-1) clinched the B North title with a 50-34 win over Neptune on Thursday. The Cougars were seeded third in the NJSIAA Central Jersey Group IV tournament and will meet No. 14 Long Branch in the first round.

Since losing to Colts Neck 63-55 back on Jan. 23, Marlboro (13-6, 10-2) won four straight division games but finished one game back of the Cougars for the B North title. They fell to No. 1 Saint John Vianney, 75-32, last Monday but followed that up with a 50-21 win over Freehold Twp. The Mustangs are seeded fourth in the Central Jersey Group IV tournament and will face No. 13 seed Freehold Twp. Senior Jessica Broad (16.5 PPG, 7.5 RPG) scored her 1000th point Jan. 29 versus Manalapan.

Neptune (10-10, 7-5) finished third in the A North, four games in back of Colts Neck. The Fliers, led by sophomore phenom Makaula Andrews (20.7 PPG) and senior Taylor Gardner (12.8 PPG) will face 11th-seeded Nottingham as the sixth seed. 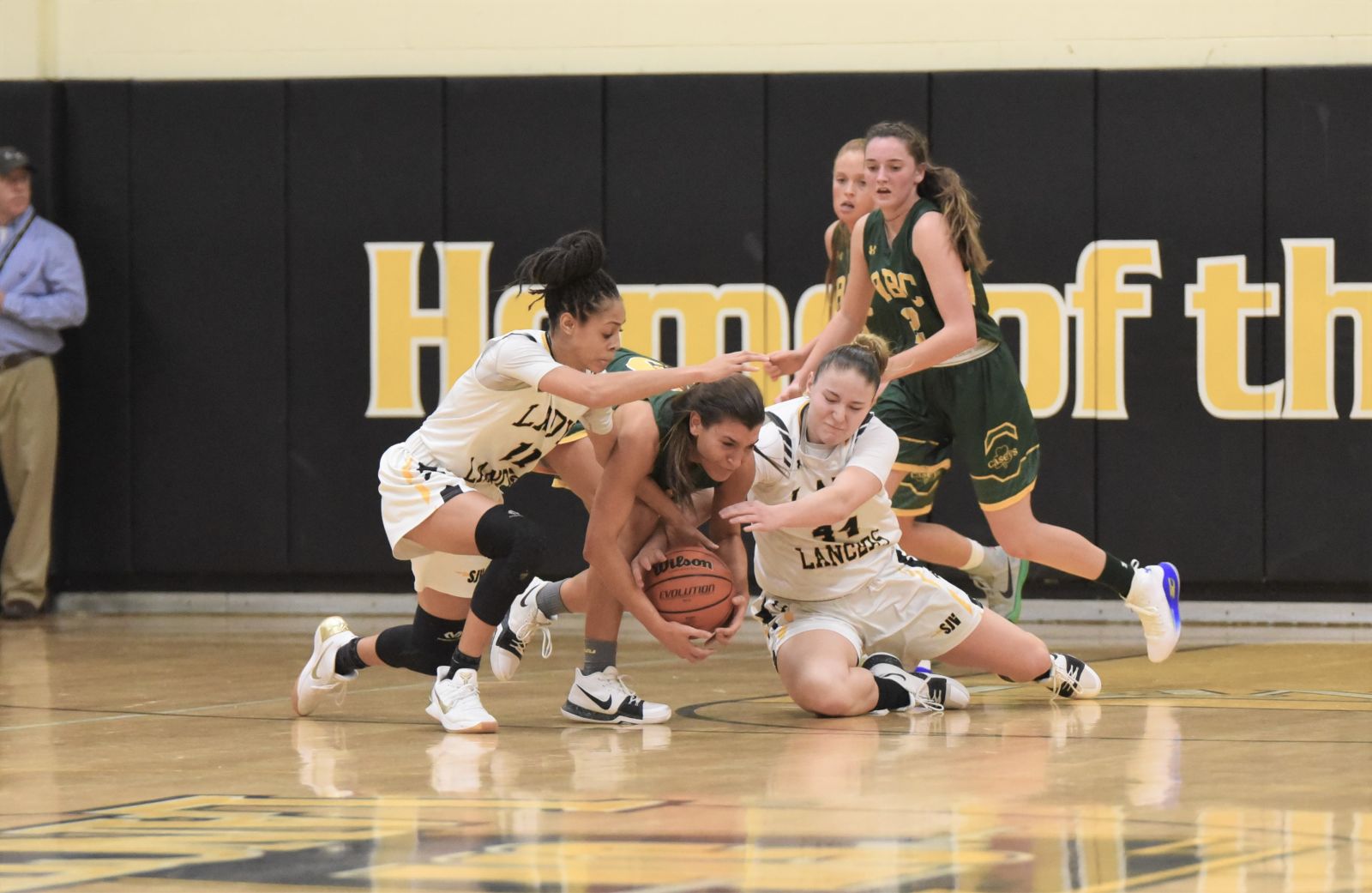 Saint John Vianney (19-1,11-0) is ranked No. 1 in the state and the Shore Conference, as well 19th nationally. They clinched the A Central division with their second win of the season over Rumson-Fair Haven on Friday. The Lancers absorbed their first loss of the season Tuesday, 60-53, at the hands of national power Christ the King, ranked third in the country. The Lancers were awarded the No. 1 seed in the South Jersey Non-Public A tournament and will face the winner of No. 9 Bishop Eustace at No. 8 Paul IV.

Rumson-Fair Haven (14-6, 10-1) is ranked sixth in the Shore. Their 84-54 loss to No. 2 Manasquan last Saturday and their second loss of the season to SJV Friday shouldn’t hurt their position in the rankings. They’ll host No. 14 Robbinsville as the third seed in the Central Jersey Group II tournament.

Holmdel (13-7, 7-4) is ranked No. 9 in the SSN top 10 due to its tough schedule. Their four division losses came against SJV and RFH. The Hornets will host No. 13 seed Carteret as the fourth seed.

Red Bank Regional (10-10, 5-6) made a late-season push to qualify for the state playoffs and as the seventh seed will host tenth-seeded Cranford. 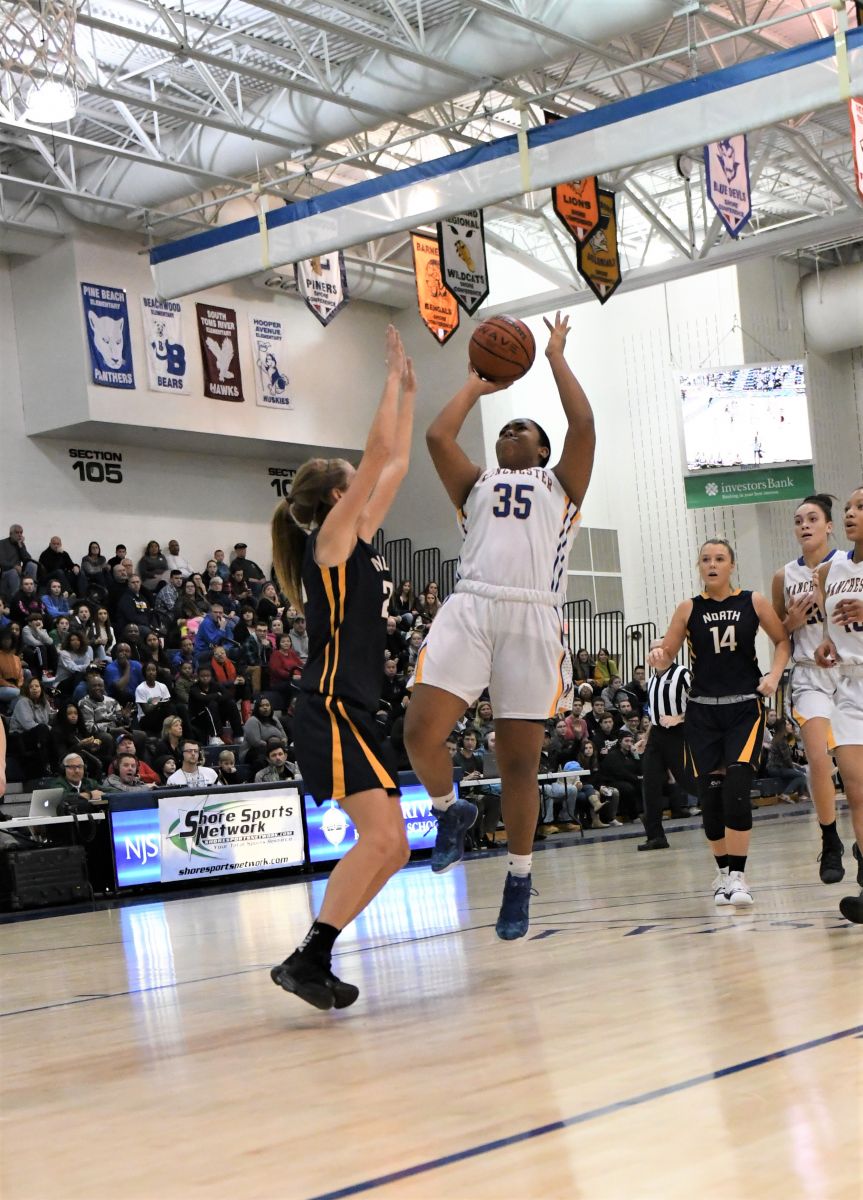 Toms River North (19-2, 14-1) has clinched at least a share of the A South championship and is ranked No. 7 in the Shore Conference. The Mariners have rebounded from their 54-41 loss to Jackson Memorial by winning four games in a row. As the No. 3 seed in South Jersey Group V, they’ll host No. 14 seed Atlantic City.

Jackson Memorial (16-2, 12-2) will need to win their remaining two division games for a shot at catching TRN for the title. The Jaguars – ranked ninth in the Shore Conference – have won six in a row and eight of their last nine games. As the No. 4 seed in South Jersey Group V, the Jaguars will host No. 13 Atlantic Tech.

Toms River East (12-7, 9-5) rebounded with a 44-24 win over Southern after dropping games to division rivals Southern and Jackson Memorial. The Pirates were awarded a No. 4 seed and will host No. 14 Timber Creek in a South Jersey Group III game.

Manasquan (19-2, 13-1) is the No. 3 team in the Shore Conference and ranked third in the state and has clinched the B North championship by one game over RBC. Since their loss to the Caseys on Jan. 23 the Warriors have reeled off eight straight wins including their 53-42 win over Rutgers Prep and a 84-54 rout of RFH. They’re the No. 1 seed in Central Jersey Group II hosting No. 16 seed Bordentown.

Saint Rose (20-1, 15-0) is ranked second in both the Shore Conference and the state. They’ve clinched the B Central and have won 17 games in a row since losing to Pickerington Central (OH) – ranked No. 3 in Ohio – back on Dec. 27. They had a huge win against nationally ranked Long Island Lutherine (NY) and will travel to Manasquan Saturday for another epic battle with the Warriors. The Purple Roses were given a surprising low seed at No. 5 and will host No. 12 Immaculata in the South Non-Public A tournament.

Trinity Hall (19-2, 13-2) absorbed its first two losses of season within four days of each other with both coming to St. Rose, ending their hope for a division title. They rebounded with a 64-32 win over Point Pleasant Beach and were given a third seed in the South Jersey Non-Public B tournament hosting the winner of the No. 11 Timothy Christian vs. No. 6 Patrick School game.

Mater Dei (14-8,11-4) won four games in a row before losing to St. Rose, 65-34, on Wednesday. As the No. 9 seed they’ll travel to eighth-seeded Moorestown Friends with the winner facing No. 1 seed Trenton Catholic.

Point Pleasant Beach (11-7, 9-6) had losses to Mater Dei and Trinity Hall this past week but will still host No. 9 seed Perth Amboy Tech as the No. 8 seed. 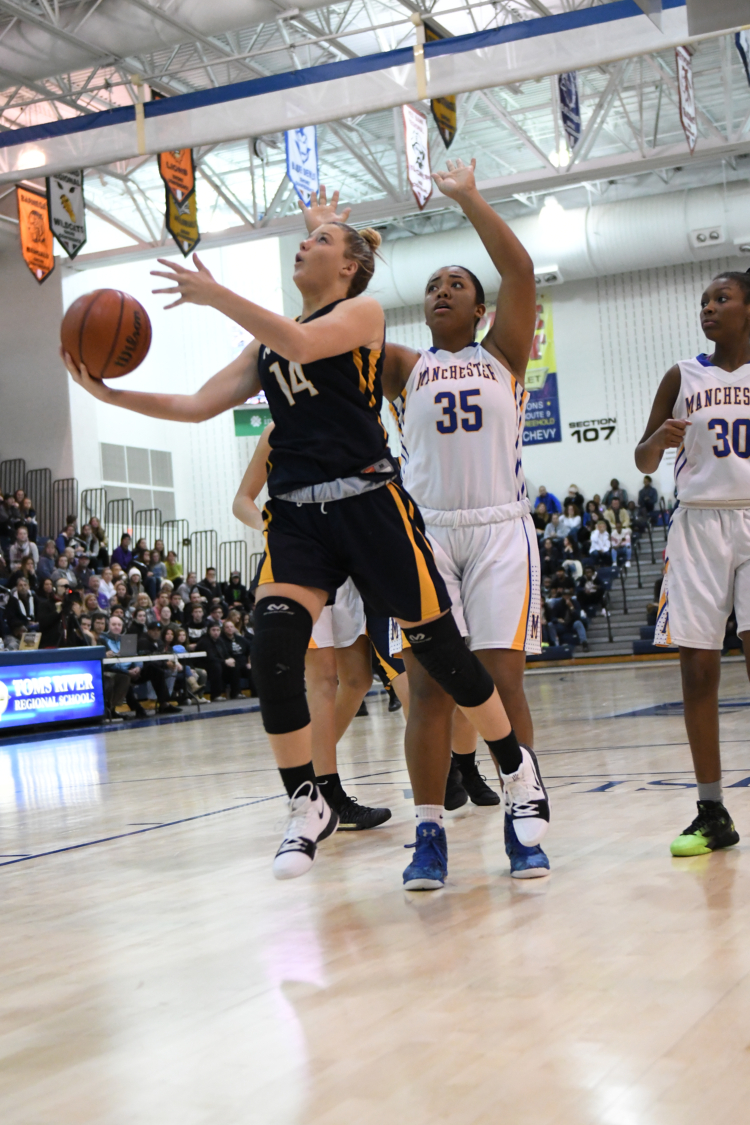 Manchester (19-2, 13-1) shared a piece of the B South title with Donovan Catholic after losing to them by one point, 50-49, a couple of weeks back. The Hawks have maintained their No. 5 ranking in the Shore Conference after winning four in row following a 53-41 loss to state power Franklin. They were awarded the No. 1 seed in South Jersey Group II and will host No. 16 Point Boro.

Donovan Catholic (19-3, 13-1) is one of hottest teams in the state winning 17 straight games since losing to TRE, 56-31, back in December and is ranked eighth in the Shore. As the seventh seed, the Griffins will host No. 10 Mount Saint Mary with the winner traveling to No. 2 Gloucester Catholic.

Barnegat (13-7, 10-4) has won five of their last six games including two in a row with their lone loss coming against Manchester, 53-47, last week. Barnegat will host No. 10 seed Willingboro as the seventh seed.