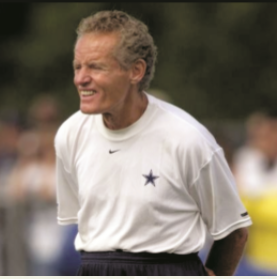 James W. Garrett, 87, of Monmouth Beach, who lived his life with a joy and passion that inspired everyone he met, died peacefully at home on February 9, 2018, after a truly remarkable and memorable life of faith, family, and football. A devout Roman Catholic, a devoted husband and father, and an outstanding athlete, football coach, and talent scout, he spent his entire life doing things for other people. In both his family and his career, he believed that everybody deserves “a chance to get to the plate” in life. Selfless and generous, he believed in people even more than they believed in themselves.

When he died, he was surrounded by his loving family of Jane, his beloved wife of 59 years, and his eight loving children Jim (Margaret) of Cleveland Heights, OH; Jane Stricker (Gregory) of South Russell, OH Jennifer of Chagrin Falls, OH; Janine Flaherty (Harry) of Oceanport, NJ; Jill of Weston, MA; John (Honor) of Easton, PA; Jason (Brill) of Dallas, TX; and Judd (Erin) of Dallas, TX.

He was born June 19, 1930, in Passaic, NJ, the eldest son of James and Isabelle (Sullivan) Garrett and elder brother to Richard (the late Muriel) of Tarzana, CA, and Eugene (Maureen) of Deerfield Beach, FL. A 1948 graduate of Rutherford (NJ) High School, he was an outstanding three-sport athlete (football, basketball, and baseball) and was inducted into the Rutherford High School Hall of Fame. A 1952 graduate of Utah State University, he was a two-sport athlete and an all-Skyline Conference fullback and catcher. He served as a lieutenant in the United States Army at Fort Lee, VA, from 1952 to 1954.

He went to training camps with the Philadelphia Eagles in 1954 and the New York Giants in 1956 and played in the Canadian Football League. After earning a master’s degree from Columbia University, he began his coaching career as a high school coach in Pauling, NY, and was an assistant coach in football and baseball at the United States Coast Guard Academy and Lehigh University. At Susquehanna University (1960-1965) he coached both football and baseball, leading the football team to a 39-11-1 record that included undefeated seasons in 1961 and 1962. His six years at Susquehanna were the most rewarding coaching experience of his entire life. After stints as a talent scout with BLESTO-V and the Dallas Cowboys, he coached special teams, running backs, and the defense for the New York Giants (1970-1973), defensive backs with the New Orleans Saints (1976-1977), and offensive backs with the Cleveland Browns (1978-1984). He also coached the Orlando Panthers of the Continental Football League (1968), the Houston Texans of the World Football League (1974), and Columbia University (1985). He was also a highly regarded talent scout for the Dallas Cowboys from 1986 to 2005.

Well known around the Jersey shore for the workouts he conducted in the backyard of his oceanfront home in Monmouth Beach, he led hundreds of Jersey shore college and professional football prospects through drills every summer for more than 30y years. He also wrote for Jersey Sporting News from 1996 to 2010) which brought him great joy to share his knowledge with young athletes. A dog lover, he loved taking long walks on the beach with his wife, Jane, and their dog. A gifted public speaker and a wonderful storyteller, he kept his family and friends laughing with his hilarious stories. Throughout his entire life he always gave his beloved wife Jane all the credit for the many years of happiness in their marriage and within their large loving family. One of a kind, a larger-than-life character and a role model for all, Jimmy Garrett, or “Coach,” lived a wonderful life.

In his memory and in honor of his love of faith, family, and football, donations may be made to Fellowship of Christian Athletes, 6 Drummond Place, Red Bank, NJ 07701.

From all of us at JSN, we will miss our long time friend and coach. Our prayers go out to the family.Michael and Francesca Attardi