RED BANK – Red Bank Catholic’s march toward superiority in Shore Conference field hockey has been a steady climb in recent seasons and this year’s team is poised to take another step toward eliteness.

In 2014, RBC went 6-9-3 and a year later they improved to 7-11-2. Then in 2016, their record jumped to 8-9-3 before finishing 16-6 last season when they qualified for the Shore Conference Tournament for the first time in years, were ranked in the top 10 and advanced to the  NJSIAA Non-Public South semifinals.

This season there’s been no let up. The Caseys charged out of the gate winning their first four games by a combined score of 19-0.

The most impressive win of the four was a 1-0 victory over Middletown South in their third game of the season. The Eagles came into the season unranked but are currently 8-1 with wins over four teams ranked in the preseason top 10.

The Caseys’ first loss of the season came against Shore Regional – ranked second in the Shore and 10th in the state – 5-3, in a game where RBC trailed, 3-0, at the half before outscoring the Blue Devils, 3-2, in the second half.

Red Bank Catholic entered the season ranked ninth in the Asbury Park Press preseason top 10 poll – something that hasn’t happened in quite some time – and should climb up the rankings when the next poll is released.

Following their loss to Shore last Thursday, the Caseys rebounded nicely with a 3-2 win over a very good Raritan club that returned 10 key players from last season’s squad that qualified for both postseason tournaments. They then routed Holmdel on Thursday, 8-0, improving to 6-1 on the year.

“So far we’re having a pretty solid season,” Red Bank Catholic head coach Meg Pietrunti said. “Our only struggle was the Shore game, really. We have a pretty young team. We do have a lot of seniors but the majority of our starters are younger and the future looks great with that. Yea, I think we’re doing all right and we’re getting better every game so we’re just going day by day.”

Red Bank Catholic brought back their top two scorers from a year ago, including freshman sensation and second-team All Shore midfielder Julianne Kopec. The super athletic Kopec scored 15 goals and assisted on nine others and has already attracted Division 1 attention. As of Thursday, Kopec has six goals and two assists entering Friday’s matchup against No. 1 Rumson-Fair Haven.

“Julianne started every game last year as a freshman,” Pietrunti said. “I really don’t want to say it, but she’s one of the best players we’ve seen at RBC in a very long time. We’re very lucky to have her especially since she’s just a sophomore so her future is pretty bright; she takes charge for sure.”

Last year’s leading scorer and All-Division selection, Shannon Tringola, had a breakout sophomore season a year ago when she scored team-highs in goals with 22 and assists with 13. Tringola is also being recruited by D1 schools and so far this season she’s tallied a team-high eight goals and seven assists after her four-goal outburst against Holmdel.

“Shannon just committed to Drexel University and she’s just a junior,” said Pietrunti.  “Shannon’s an all-around great athlete, a great leader and one of our captains. She just knows the game, is very coachable and we’re very lucky to have her be part of our team – she’s a little feisty kid.

“We’re lucky to have two really talented players who play all-year round that will definitely help us in the long run,” Pietrunti continued.

Senior forward Samantha Sercia is also back and has been a pleasant surprise so far this season as she’s second on the team in goals scored with seven after netting three goals last season with eight assists. Her increased output and senior leadership up front have been invaluable in the Caseys fast start.

Another senior, forward Victoria Black, has three years of varsity experience behind her entering the season and is a mainstay up top this season.  She’s scored three goals along with an assist so far while using her veteran presence to navigate inside the striking circle.

Sophomore forward Gabrie Goring has burst on the scene and is someone to take notice of. The super sophomore is fourth on the team in goals with five and second in assists with four.

Starting goalkeeper Erin Smith is back in the nets after recording 137 saves a year ago with sophomore Julia Foy seeing time there as well. Together they’ve combined for five shutouts this season.

Defensively, the Caseys needed to replace a strong senior class in the back, but junior Hannah Howard has done an fine job leading a group of young but upcoming defenders including sophomores Reilly Traynor (1 goal) at right back and Lindsey O’Brien at left back.

“Hannah is our center back and she’s been starting since her freshman year in the back,” said Pietrunti. “This is the first year that she’s center back so she’s taken charge back there and doing a really great job showing the younger girls how it’s done. She’s really filled some of the shoes from last year; she’s helping big-time back there.

“They’ve been doing great. In the beginning of the season we thought it was going to be a struggle (in the back) because we lost so many seniors from last season who were in the back but they’re stepping up and doing their job.”

Last season the Caseys were seeded No. 1 in the NJSIAA Non-Public South tournament before losing to fifth-seeded Camden Catholic, 5-1, in the semifinals.

“It definitely was disappointing,” said Pietrunti of their semifinal loss. “Not that we were shocked, but it was really nice being seeded No. 1; it’s been a while since that happened. From last year being in the semis hopefully we can make it a little further this year. We think about the Shore Conference Tournament first and that will just make us better for the states. We just need to keep pushing day by day.”

UPDATE: On Friday, the Caseys (6-2, 4-2) played Rumson-Fair Haven – ranked sixth in the NJ.com Top 20 – evenly for the first 30 minutes earning a 1-1 tie at the half, but the powerful Bulldogs erupted for three second-half goals to pull away in an eventual 4-1 win. Kopec scored the lone goal for the Caseys – her seventh of the year. 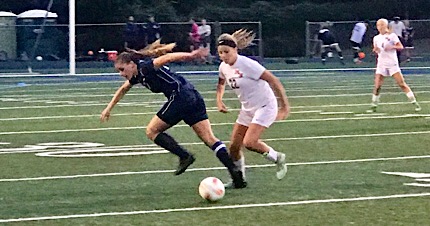 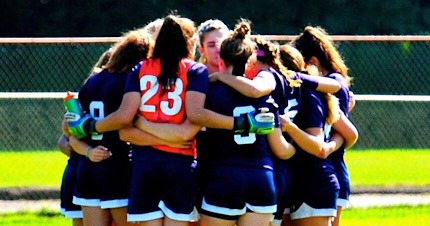 MATER DEI PREP GETS THE WIN