LONG BRANCH – In one of the Shore Conference’s longest running Thanksgiving football rivalries, the Bucs of Red Bank Regional and Green Wave of Long Branch will hit the field for the 96th time on Thanksgiving morning.

The two teams annually play for the Ty Lewis Memorial Trophy, which is named in honor of the former Red Bank coach who passed away in 1990 at the age of 41 after a battle with leukemia. Lewis was one of the first black head coaches in the Shore Conference, and his impact is felt on the Red Bank campus to this day.

“He was someone who during my time of play, I definitely heard so many great things about Coach Lewis then and obviously since I’ve been here, I’ve heard even more things that make me admire the man so much,” said 10th year Red Bank head coach Nick Giglio, who played his high school ball at Shore Regional. “I know what both teams are playing for. To me, as long as both teams go out there and compete hard, bring sportsmanship to the field and play for their community, at the end of the day, win or lose, we shake hands and we respect each other because we honor Ty Lewis in that regard.”

Long Branch leads the all-time series, 61-31-3, and Green Wave head coach Dan George, who is in his 20th year leading the program, also played in this game three times as a player.

“I still get some of those same feelings on game day that I did when I was a player,” George said. “It’s always a great way to start the Thanksgiving holiday, being out there with your players with a packed crowd and two passionate fan bases supporting their teams.”

Long Branch will have the home field advantage this year, but make no mistake, both teams will have plenty of supporters in the stands. That includes alumni from both schools, and Giglio always enjoys meeting someone new who attended Red Bank every year on this day.

“You get what I call the ‘fence line group’ that you get for state playoff games,” Giglio said. “When I played in state playoff games in high school and coached them here, the stands are filled up. But you also get people who haven’t seen each other in a long time talking with one another and watching the game at the same time. That is a special thing to be a part of and it’s great because every year, I end up meeting another alumni or somebody who played in it and it’s good to get to know more about the history of the school.”

Both coaches agree that the records go out the window in this game, because there is always a blank slate each year.

“It’s always a great honor and privilege to play Long Branch and to represent the Red Bank alumni each year,” Giglio said. “The records don’t really matter going into the game, because you’re playing for more than just what goes on during the season. To me, it’s about history and appreciation. The more you learn, the more you appreciate things about where we are now because of maybe what they did back then. We always talk about past, present and future with our players, and we always try to combine everyone. It’s kind of a neat thing that we do so our players respect and enjoy hearing about past teams as well.”

“I’ve always felt this game is football at its simplest and purest,” George said. “It’s a game of family and tradition. The kids always look forward to this game because they look forward to winning the trophy.” 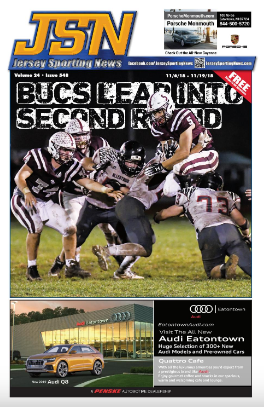